SubDocta Arrested for Practicing Medicine Without a License

Reno, NV – Preston Charles, also known by his DJ/Producer alias SubDocta, was arrested late Thursday morning for practicing medicine without a license. Subsequently, he was booked into the Washoe County Sherriff’s Office where he was charged with medical malpractice and gross criminal negligence.

Police said they were first alerted to his nefarious dealings when they noticed posts on his ‘SubDocta’ social media accounts. Apparently, Charles was promoting a live stream on the popular streaming site Twitch, and a Facebook group called The Psych Ward. Additionally, they claim Charles participated in a live stream guest lecture on the Deep, Dark & Dangerous Facebook page. There, authorities say he spoke on the subject of experimental audio treatments as a coping mechanism. Police believe he may have been trying out some sort of diabolical experiment with sound.

“This man was out there practicing medicine without a license,” said police investigator Steven Sorch. “He’s out there telling people he’s a doctor and running an online psychiatric facility on Facebook. We have no idea how many people he could have hurt or killed. He’s a danger to society. A real menace. And I know I speak for everyone in the community when I say I’m glad he’s behind bars where he belongs.”

Rotten to the Core

Investigators say they interrogated the self-proclaimed ‘SubDocta’ for over an hour to find out the details of his operation. “He just kept feeding us a line of bullshit. Saying he was a DJ, that he makes music, the usual. He even tried to tell us he wasn’t a real doctor. Like we don’t know that.”

Despite continuous claims that Charles used “Reason and Logic” to treat his patients, authorities weren’t buying his story. “Dude is trying to make it sound like we don’t know what we’re doing,” remarked officer Sorch. “We found a lab coat in his bedroom as well as some CD players and what looks like an audio sound device. We don’t know what those were used for, but we do know the lab coat is consistent with that of standard medical attire.”

Charles is currently out on bail and his case is pending trial. Further charges may be brought against the would-be doctor as more evidence is brought to light. However, the county court stated that the trial will be delayed until after the Coronavirus lockdown is lifted. 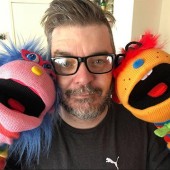