Seriously, Being a Man Fucking Blows Too!

In my last article, we glossed over the reasons why it fucking sucks to be a woman. I decided, hey, misery loves company so let’s talk about WHY IT SUCKS BEING A MAN. I clearly have no dick (last time I checked, though I could be wrong). So instead, I interviewed men from various walks of life and backgrounds to find out why it sucks being a man sometimes.

Dicks. They come in all shapes, sizes, and colors. Like a box of mysterious assorted chocolates. But one common theme among these piss sticks is the inconveniences that come with them.

I asked my boyfriend (throwing you under the bus, I’m sorry) “what’s one thing that sucks about being a guy?” He responds “well, sometimes we accidentally sit on our balls”. You read that right. They literally SIT on their TESTICLES if they aren’t careful! Wait…WHAT?! Additionally, I was informed that ballsacks also change shape/consistency like some sort of silly putty left in the sun. They ….sag(ew) in the heat and shrivel up to little peas in the cold.

Also, (women, please brace yourselves, you may need to get some mouthwash ready) THEIR DICKS SOMETIMES TOUCH THE TOILET WATER. The same goes for his balls. There’s no greater shame than when a man dunks his nuts in poopy toilet water. They say “the bigger the better” but in this case…is bigger REALLY better? When was the last time you’ve asked your man if his junk had touched the toilet water before you stuffed it in your mouth? Nasty!

Then there are the awkward boners. They get them at work. They get them in class. Hell, they even get them in court. It happens all the damn time! They get them while changing the oil in your car and while they’re talking to your grandmother about her famous pot roast. Guys get boners anywhere… everywhere! Nothing is sacred. Subsequently, they must conceal the evidence like a 10-year-old stealing a pack of Pokemon cards. Guess it’s not SO bad being a woman afterall.

Some guys shave it bald (Mr. Clean style), some trim, and some leave it all-natural. Women do a pretty good job of getting it all when we opt to shave. But men have balls, how do they avoid cutting through their balls? Do you even shave balls when you trim your piss stick fro? There are so many questions!

One interviewed man said, “Not having a convenient way to shave under my balls without a friend’s help is a thing that sucks about being a man”. Whoa. Mind blown! Do men shave each other’s balls? Is this some sort of unspoken bro law? “I was itching them, just a thought!” I’ve also heard pubes can be helpful to prevent ball stickage, you guys aren’t fooling anyone with that awkward little leg shake you do in the grocery store!

Men and women are both prone to sexual harassment being the victim OR the harasser. But, typically, it is men who are the most often accused. Some definitely are guilty of this without a doubt. A lot, actually. But men are sometimes left confused as to why they’re on temporary suspension after telling their coworker that they “like her mousepad.”But I mean, he should know better right? A coworker asked me what time it was today and I had to yell at him “I HAVE A BOYFRIEND,” because he obviously wants me.

A Reno man said this to me: “The modern dating world is almost exclusively controlled by women. For example, on Tinder and Bumble, you can’t even talk to a woman unless she first looks at your photo and approves. For this reason, I’m a big advocate of actually trying to meet people in the real world where you can try to talk to anyone, and if you two don’t click or she doesn’t like you, you can move on. But you won’t be prevented from even trying. In the online dating world, women hold all the cards.”

No arguments here. Women won’t talk to you on dating sites if you don’t have a picture. Period. And if you do, you better be at least a strong 8, at least 6″0′, have a beard, tattoos, and be willing to pay for the entire date.  Which will usually be sushi.

Come on sis, we’ve all been there. It’s wrong, but it’s true. Gotta give these good guys a chance! Time to move on from Troy who’s got 6 felonies, 3 baby mamas, 2 broken trucks, and a partridge in a pair tree.

This is another common complaint with men. They date you because they like you, both as a friend and a romantic interest. They just wanna relax, have fun, and enjoy their day with you. BUT DAMMIT I TOLD YOU I WANTED THE ICE CREAM WITH THE CHEESECAKE BITES, NOT THE PEANUT BUTTER CUPS YOU DUMB FUCK! I’m sorry. I didn’t mean that. Cuddle me, please?

Men don’t have periods. How is he to know when you want to cuddle and when you don’t want him within a 20-mile radius of you? These poor guys don’t know how to play the menstruation Russian roulette. He ends up confused, unsure, and sitting there wondering what to do while we girls get pissed off that he is confused because HE SHOULD KNOW WHY WE’RE UPSET WITHOUT US HAVING TO TELL HIM, DAMMIT!

Finally, guys are expected to be manly. All of the time. They can’t cry without being seen as “weak”. They need to know how to fix the dishwasher, everything about sports, working on cars, wrestling a bear, and building a log cabin. Men often feel they are seen as “less of a man” if they can’t do this shit. But society is merciless… and so are other men. Not all dudes are into sports. Or cars. Or powerlifting.

But there’s no room for diversity and unique personalities. Men either fit the bill, pretend, or risk being ostracized by society… relegated to the lowest dregs of male society… the con. There, they’ll be forced to wander the earth dressed as Batman or a Klingon or some shit. Still a virgin at 40, hair lip, LARPing in the woods. It’s a mess. They can’t win.

So there ya have it. It totally sucks being a woman. Kinda sucks being a man too. Probably sucks being one of the other variants in between. In summation, we’re all fucked and completely miserable. It’s impossible to find joy in life and we should all give up hope of ever being happy or fulfilled.

With that said, let’s give men a break. Let them play their 112th round of Call of Duty and bring them a cold beer. It’s only a matter of time before we yell while we’re PMSing. Be kind while you can. Besides, we’ve got better things to do than bitch and bother our men. We should be cyberbullying all those skanky thots on Instagram and brushing our teeth to get rid of the traces of toilet water. 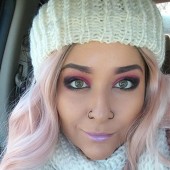 Alexis Perez is an eccentric woman who's hair changes as quickly as her mood swings. She enjoys pizza, Jason Momoa, and musing over nonsensical gibberish.